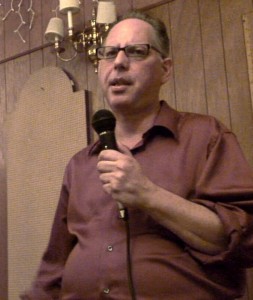 David Solomonoff, President of the Internet Society of New York (ISOC-NY) gave a talk at the August 2010 monthly meeting of the Manhattan Libertarian Party. David’s theme was ‘Taking Back the Edge: Freedom and the Internet Model’. The meeting took place in the back room of the Ukrainian East Village Restaurant (famous in alternative music circles as the site of a legendary New Order show in November 1981). David spoke about the importance of maintaining the end-to-end principle and the open internet, threatened today by repressive political forces and monopolistic interests. There was some lively discussion with the libertarians about whether regulation was preferable to unwelcome consolidation. David emphasized the bottom-up standards making process that has stood the test of time.