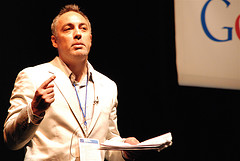 ISOC-NY is a co-sponsor of Evan Korthâ€™s Computers & Society speaker series at NYU this fall. The next talk is this Wednesday Nov 19. It will feature Andrew Raziej – his topic is “Democracy, Civic Action, and Politics in a Networked World”

Andrew Rasiej is a social entrepreneur, Founder of Personal Democracy Forum, and co-founder of techPresident. He has served as an adviser to Senator Barack Obama, Senator Hillary Clinton, Senator Tom Daschle, Congressman Dick Gephardt, the Democratic Senatorial Campaign Committee and the Democratic Congressional Campaign Committee on the use of Information Technology for campaign and policy purposes. Mr. Rasiej also maintains the position of senior technology adviser for the Sunlight Foundation.

The Internet and the phenomenon of social networking platforms
like Facebook, MySpace, plus the rich media tools like
YouTube, have given the average political proselytizer new
powers of persuasion that are resetting the political roadmap
for not only the candidates and their parties, but also for
the main stream media which is trying to cover and report on
them.

Just like we are seeing technology reshape the music and
entertainment industries, information technologies are
empowering people to use the massive networks that are being
spawned to fundamentally change politics and soon governance
itself.

Political opinion in our society is formed mostly through
people talking to each other. These conversations happen in
all kinds of typical places, like dining tables, water
coolers, playgrounds, VFW halls, bars and coffee shop
counters, and even over the back fence. Like they have for
generations, those conversations are happened in the 2008
election cycle too.

However, this year we are saw a new powerful force of a
networked public sphere emerge that is taking many of those
conversations and putting them on steroids.

Now that the 2008 election is over, this newly empowered
citizenry will start to demand a seat at the table of
governance and will upend the political power structures of
the 20th century and challenge, unions, lobbyists, and special
interests that do not heed the power of the technologies and
the voices they link and amplify.