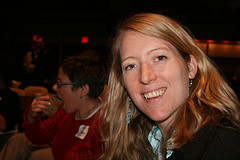 Amanda has declined to be videotaped so there will be no webcast on this one. If you want to see/hear what she has to say – attend!