The Internet Society New York Chapter (ISOC-NY) is now supporting other organizations that share our vision of open technology for social good.

Today, Tuesday, December 1, ISOC-NY sponsors our first crowdfunding campaign as part of #GivingTuesday, a global campaign for charitable giving as an alternative to Black Friday.

#SharetheNet will fund Apretaste, an initiative that brings Internet access to Cuba, and NYC Mesh, a wireless community network in NYC.

This is a critical point in the evolution of the Internet:Will the Net remain open and accessible to all – or locked down by repressive governments and corporate monopolies?

The ISOC-NY answer to that question is:

Empower Internet users to build their own Net and share it!

Every dollar you give helps the open Net.

This is also a critical point for ISOC-NY – we’re asking for your help so our Chapter can take the lead in building an Internet that is truly for everyone.

There are many ways to get involved in #GivingTuesday. I encourage you to join the movement and visit www.givingtuesday.org to learn more about how you can make a difference.

END_OF_DOCUMENT_TOKEN_TO_BE_REPLACED 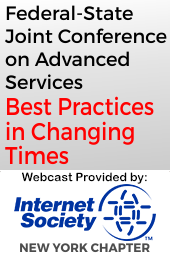 On Monday August 3 2015 at 10 am the Internet Society Livestream Channel will present a webcast of the entire proceeding of the Federal-State Joint Conference on Advanced Telecommunications Services public forum Best Practices in Changing Times on July 15 at the Marriott Marquis in New York. The program comprises three panels:

and the New York Chapter of the Federal Communications Bar Association

Infrastructure in this sense could be physical (fiber in the ground) – or open source software, legal/policy, etc. – more broadly any type of support structure.

This will be the beginning of ongoing initiatives to address the issues raised and follow with hackathons afterwards. A major component will be the development of standards and protocols for new Net-connected technologies with consideration of the social and ethical issues as machines become intelligent. We’ll also explore innovative funding methods for these projects using digital currencies.

Teachout is a constitutional and property law professor at Fordham Law School. She is a deeply experienced leader in the fights for economic and political equality and against concentration of wealth and control in the hands of the few. She is one of the leading legal experts on corruption.

Timothy builds on Free Press’ grassroots and policy work to promote universal access to open networks and protect free speech everywhere. Before joining Free Press, Tim served as executive director of MediaChannel.org and as vice president of Globalvision New Media. He has also worked extensively as an editor, reporter and photojournalist for the Associated Press, Time, Inc., the New York Times and Australia Consolidated Press. Tim critiques, analyzes and reports on media and media policy for the Huffington Post.

Technological initiatives to help people confront threats in the face of conflict, instability, and repression

Wireless Engineers predict 50x improvement in capacity; How do we make it so?

Spectrum should be WiFi and less licensed. WiFi wiil do more and more, becoming increasingly crowded. Mobile carriers, using existing spectrum, can increase their capacity using MIMO and more with little or no increase in capex. Logical policy: All newly available spectrum go to WiFi/unlicensed.

Co-creator with Dan Bricklin of the VisiCalc spreadsheet program and the co-founder of Software Arts, the company that developed it. In recent years, Frankston has been an outspoken advocate for reducing the role of telecommunications companies in the evolution of the internet, particularly with respect to broadband and mobile communications. (remote)

Sander Rabin, a physician-attorney, is the executive director of The Center for Transhuman Jurisprudence, a not-for-profit organization whose mission is education in human enhancement and the development of policies and model rules of law for human enhancement that protect our rights to our minds, bodies and genomes, while minimizing human enhancement’s potential for divisiveness and harm.

Goodnik has developed a labor-backed digital currency for information workers to share resources with non-profits and for-profit companies with a social mission.

Nate has been working as a manager of and consultant to  non-profit and technology related companies for 20 years. Nate also founded GrassrootsCamp, an organization that provides free training seminars to non-profit organizations and social entrepreneurs. It is from that experience that Goodnik started as a way to broaden the impact of those events and ideas from that community. Nate holds a BA from St. John’s College in Annapolis, MD and a J.D. from Fordham University School of Law where he was a Crowley Fellow in International Human Rights and a Stein Scholar for Public Interest Law and Ethics.

How broadband is transforming rural America and what is needed now

• Margaux Avedison, Moderator. Co-founder of EvotionMedia, a “Crypto-Media” production and finance entity. She is on the advisory board of the Bitcoin Shop and organized the first Bitcoin Education Day on Capitol Hill as an Advisor for the Chamber of Digital Commerce.She also consults for banks, individuals, large corporations and venture capitalists on Bitcoin and Blockchain 2.0 technology.  She is an early entrepreneur in the digital currency space and relaunched the first American Bitcoin Exchange, Tradehill, in 2012.

• Attorney Jeffrey Alberts, Partner in Pryor Cashman’s Litigation Group. Head of the firm’s White Collar Defense and Investigations Practice. Jeffrey’s practice focuses on government investigations and prosecutions and related regulatory proceedings, asset forfeiture and money laundering litigation, victims’ rights representation, and complex civil litigation. Jeffrey is an experienced trial lawyer who has served as lead counsel in numerous trials, including civil and criminal federal jury trials, state jury trials, and state and federal bench trials. Jeffrey has represented clients in disputes involving virtual currency. He also has been quoted by the media concerning criminal prosecutions of virtual currency service providers and government seizures of bitcoins. Immediately prior to joining the firm in 2013, Jeffrey spent six years as an Assistant United States Attorney in the Criminal Division of the U.S. Attorney’s Office for the Southern District of New York, where he investigated and prosecuted a wide variety of white collar criminal offenses, including money laundering, securities fraud, bank fraud, mail and wire fraud, and bankruptcy fraud.

• Adam Krellenstein, Co-founder Counterparty. Lead developer of counterpartyd; chief architect of the Counterparty Protocol. Counterparty is a free and open platform that puts powerful financial tools in the hands of everyone with an Internet connection. By harnessing the power of the Bitcoin network, Counterparty creates a robust and secure marketplace directly on the Bitcoin blockchain, extending Bitcoin’s functionality from a peer-to-peer payment network into a full fledged peer-to-peer financial platform.

Panel: Hear Me, Touch Me, See Me, Feel Me: Moving Natural User Interface (NUI) to the Mainstream

This panel discussion will explore the world of NUI and what it will take to move today’s emerging NUI technologies (voice recognition, Kinect, haptics, facial recognition, etc.) into widespread adoption and make them accessible to all.

The 6th annual global OneWebDay celebration will be Thursday September 22 2011. ISOC-NY’s contribution will be to host respected computer scientist and Internet iconoclast Bob Frankston who will present on the theme “Infrastructure commons – the future of connectivity”.

The subways, roads and sidewalks are vital infrastructure. The Internet should be no different – our economy, health and safety depend on our ability to communicate. Yet its provision and economy are based on outdated, inequitable, and inefficient telecom models. How do we move to a connected future?

We are happy to also announce that Dave Burstein of DSL Prime has agreed to moderate the session. Dave will also talk about the practicalities of establishing community networks.

END_OF_DOCUMENT_TOKEN_TO_BE_REPLACED

Discussion of Net Neutrality has often involved policy discussions about regulating or rationing bandwidth as a scarce resource.

On Wednesday, November 17th, ISOC-NY will host a panel with people who are building tomorrow’s broadband infrastructure to create an abundance of bandwidth that could one day make these issues moot.

The Internet Society’s North American Bureau, to which ISOC-NY is affiliated, is lending initial support to a U.S. industry effort to form a Broadband Internet Technical Advisory Group (BITAG) to develop consensus on broadband network management practices or other related technical issues that can affect users’ Internet experience. This is a collaborative industry effort to identify and address operational issues that have been at the heart of some of the recent issues attracting governmental attention. Constructively, this activity could result in organized, forward-looking discussion driven by key stakeholders and also provide opportunities to educate and inform policy makers by shedding light on underlying technical issues from the perspectives of diverse stakeholders.

END_OF_DOCUMENT_TOKEN_TO_BE_REPLACED

Dec 17: Vice President Biden announced initial recipients of grants in Round 1 of the Broadband Technology Opportunities Program (BTOP) for an amount of $183m. The awards, spread across 17 states, will be matched by $46m from public and private contributors. A total of $2bn in awards are to be rolled over the next 75 days.

On Nov. 10 2009, in Hiroshima Japan during IETF76, the Internet Society (ISOC) convened a panel of experts to discuss the current explosion in bandwidth usage. Topics included metrics, net neutrality, and management methods.

With just 90 days left to its deadline, the Federal Communications Commission (FCC), at the Open Commission Meeting on November 18, 2009, received a status update on development of the National Broadband Plan. On the agenda was also a Petition for Declaratory Ruling which requests that the Commission establish timeframes for State and local zoning authorities to consider wireless facilities siting applications. The Broadband presentation focused on gaps in coverage.

Video and slides are below.

END_OF_DOCUMENT_TOKEN_TO_BE_REPLACED

On Nov. 17 2009, in advance of the NYC  Council hearing on the same topic, and in conjunction with Web 2.0 Expo, an ‘Oxford Style’ debate was held on advisability of Network Neutrality regulation.

END_OF_DOCUMENT_TOKEN_TO_BE_REPLACED

Nov 10 2009: The United States Department of Agriculture’s Rural Utilities Service (RUS) and the Commerce Department’s National Telecommunications and Information Administration (NTIA) today announced they are streamlining the American Recovery and Reinvestment Act’s broadband grant and loan programs by awarding the remaining funding in just one more round, instead of two rounds, The first round of RUS’s Broadband Initiatives Program (BIP) and NTIA’s Broadband Technology Opportunities Program (BTOP) garnered $28bn worth of applications, and about $4bn is expected to be awarded in loans/grants. The agencies have issued a Request for Information (RFI) seeking public comment on how the application process may be improved.

END_OF_DOCUMENT_TOKEN_TO_BE_REPLACED

An Ars Technica article details a proposal by the Bill & Melinda Gates Foundation to bring fiber to 123,000 public institutions nationwide at a cost of $4.9bn-$10bn.  The FCC is taking comments.
END_OF_DOCUMENT_TOKEN_TO_BE_REPLACED

The NTIA and RUS have published the database of BTOP applications in Round 1 at
http://www.ntia.doc.gov/broadbandgrants/applications/search.cfm

Of $7.2 billion allotted to broadband under the ARRA approximately $2.4 billion from RUS and up to $1.6 billion from NTIA is available in this first grant round.
END_OF_DOCUMENT_TOKEN_TO_BE_REPLACED

With the deadline for applications for the first round of grants from the $7.2bn set aside for broadband adoption projects in President Obama’s stimulus plan rapidly approaching (Aug14), members of many of NYC communities met to discuss how best to achieve results. Representatives of the City’s Department of Information Technology and Telecommunications (DOITT) poured cold water on many aspirations stating that most, if not all, the cash would go to rural projects. Despite this many declared it their intention to apply.

Audio & Video below. A listserv has been set up for further conversation. Twitter: #nycbtop
END_OF_DOCUMENT_TOKEN_TO_BE_REPLACED

July 10, 2009
Call for Reviewers
Broadband Technology Opportunities Program
Help America Advance its National Objective of Broadband Access for All
The National Telecommunications and Information Administration (NTIA) of the U.S. Department of Commerce is soliciting experts to evaluate grant proposals for the $4.7 billion Broadband Technology Opportunities Program (BTOP), an important part of the American Recovery and Reinvestment Act of 2009.
END_OF_DOCUMENT_TOKEN_TO_BE_REPLACED